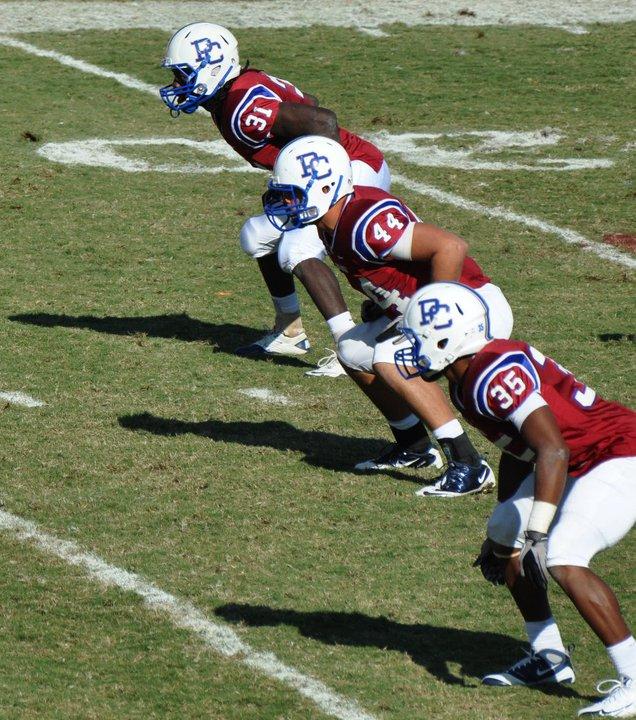 PC fell to 1-8 on the year after being defeated 37-7 by Stony Brook on Saturday, November 6th.  Although the Blue Hose only trailed 7-0 at halftime, Stony Brook came into the second half strong, scoring 30 consecutive points to secure the win. PC’s managed to put up a touchdown against the Seawolves late in the game, although it was nowhere near enough to win.
Despite falling short to Stony Brook, the game marked a few firsts for the Blue Hose. Ryan Singer earned the starting job at quarterback for the first time during his career, going 10 for 16 for 62 yards with no interceptions. Seth Moreland, a redshirt freshman, caught Singer’s 12-yard pass to earn his first collegiate touchdown reception with just 20 seconds left in the game.
Singer shared his role at quarterback with Myron Gary, who went 6 for 11 for 58 yards. Combined, the boys went for 120 yards passing, while PC’s offense gained 176 total yards.
Although the Blue Hose ultimately fell short, Patrick Morgano had a very good day, with nine punts, including a 44-yard punt, for a total of 291 combined yards. He averaged 32.3 yards per punt, pressing Stony Brook deep onto their side twice.
Trandon Dendy also had a good performance, running ten times for 35 yards.  Arthur Williams had three catches for 43 yards, while Patrick McCoy also had three for 15 yards.
PC’s head coach, Harold Nichols, did not seem particularly happy with the boys’ performance against Stony Brook.  “I really feel like we were making some progress as a football team over the last few weeks and we were starting to turn a corner.  Today we didn’t play very well.  Part of it came from a very good Stony Brook team we played today.  Part of it came from our lack of execution on both sides of the ball,” he said, according to gobluehose.com.  He did find a few positives to focus on, though, saying, “Well I think we stopped the run pretty well in the first half and we knew going into the ballgame that we were going to have to stop the run because they are very good at it.”
Bailey Memorial Stadium saw limited attendance on the 6th, most likely its smallest audience of the season. Hoseville, which was also mostly abandoned, is encouraging all students to join for the final home game when the Maintenance Band will be performing in the student section.
PC enters its last two games of the season with a record of 1-8 overall and 1-4 in the Big South, while Stony Brook improved to 5-4 overall and  4-0 in the conference.
The Blue Hose look for two more wins in their final two games of the season, this weekend against Charleston Southern and November 20th against Davidson.