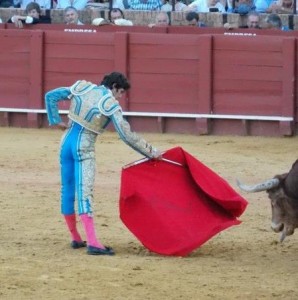 When people think of Europe, pictures of snowy villages and cozy mountain cottages are among the images that come to mind. For Jacob Rogers, however, warm clothing has been absolutely useless in Seville (or as the Spanish say, Sevilla), Spain.

When asked about the most useless thing he packed, he replied “Definitely my hoodie and jeans–it is ridiculously hot here all the time.”  Rather than the suffocating humidity of the South, Seville is just plain hot.

Meal times in Spain are very different than what we PC students are used to. We are used to going to GDH at 11:15 when it opens and at 5:00 for dinner—well, maybe not everyone, but that’s often what I end up doing. At any rate, Americans typically eat in the 11:00pm-1:00pm range for lunch and 5:00pm-7:00pm for dinner.

Jacob has had to adjust his meal habits to that of the Spanish, which is lunch from 2:00pm-3:00pm—typically taking up the whole hour or more—and dinner starting at 9:00pm. For those of you familiar with the term “GDH squatting,” which is sitting in GDH even after one has finished one’s meal to catch up with friends (often seeing new waves of friends coming through), this is a good comparison. Europeans eat course by course, taking their time to socialize. None of that on-the-go food, like when we go to Springs and grab a sandwich.

With meal times being later in the day, comes a different late night lifestyle. On the weekends, we stay up late, whether it is going to the fraternity houses or simply hanging around with friends. However, our basic schedule has not adapted to that. One can say that the Spanish are much more realistic about their schedules and plan accordingly.

Continuing with the meal theme, Jacob said that the weirdest thing he’s eaten while abroad has been fish. The way fish is served overseas is with its head still intact. Jacob said that he “can’t get past the fact that it looks like it is staring” at him.

One of the biggest adjustments for someone from a small campus like PC is having to get up earlier than 5 minutes before class. Jacob now has to use the public transportation system, which is complicated in itself, to get to class. Therefore, he has to leave at least thirty minutes before class just to get there on time which requires much more thought and planning.

In rural South Carolina, public transportation is essentially nonexistent. Therefore, it already is a big adjustment and then you throw in the language barrier. Jacob says that he has gotten lost more times than he can count. It gets frustrating for him when he gets lost trying to find something that should be relatively easy to get to.

For those of you thinking about going overseas, make sure you’re prepared for the culture shocks. It may seem basic; however, you’d be surprised at how different the smaller things can be.