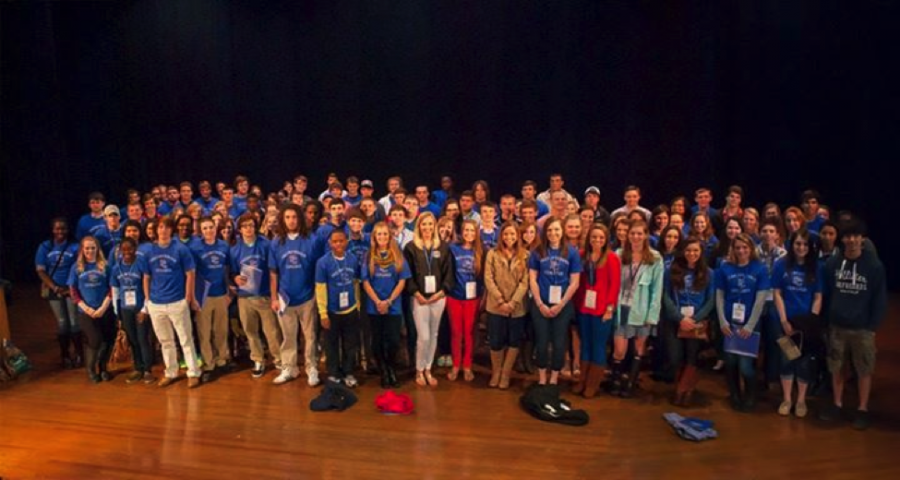 On Saturday, March 24, over 100 students, who have been accepted into the Class of 2018, arrived on campus for Accepted Students Day. Although the weather was unpleasant, there was a lot of positive energy and excitement surrounding the incoming student body. Many students were enthusiastic to be on campus as they began meeting their future roommates and friends.

The activities of the day began in Belk Auditorium with a group photograph. Afterwards, the incoming students were divided into small groups in order to have time to get to know their fellow classmates, as well as ask current students any questions they had. There were 76 current students who helped with the day’s activities by serving as small group leaders and tour guides.

Although there was initially some nervous tension, it quickly subsided as prospective students participated in icebreaker games and got to know the members of their small group. Many students quickly realized that they fit in really well at PC. After the game portion of the small group session ended, students asked a wide range of questions from “Which professor is the best to take for biology?” to “How’s the food?” In this way, they could get honest answers without the pressures of parents and admissions counselors. They were able to see the real PC, which could be their potential home for the next four years.

After the session ended, students were brought to Templeton for an activity fair, in order to speak to professors and students in different departments, as well as get a glimpse into the wide range of activities and organizations on campus to get involved in.

The day’s activities concluded with a meal in Greenville Dining Hall, where a wide variety of GDH’s specialties were served to incoming students and their parents. This was another great opportunity for them to mingle with current students over a good meal. A photo booth was present so students could capture memories with their newfound friends.

Katie Anderson, one of the student coordinators for the event commented, “It warms my heart to think a few years from now, the incoming class might look back at these photos that commemorate a day when they met people who would become their classmates, roommates, and close friends.”

The day’s activities were a success. Katie Anderson further added, “Everyone I have heard back from– current students and accepted students alike– had only positive things to say about their experience with Accepted Students Day.” Twenty one students made the decision to become members of the Class of 2018 last Saturday on the spot, and many more are expected to accept in the upcoming weeks.

Granted the weather was gloomy, the PC student body really shined and brought forth the best of what makes PC such a unique and great college. Katie Anderson also stated, “Accepted Students Day represents PC at its best. Everyone on campus interacts with the students and their families, whether they are volunteering or joining them at lunch. It’s a day that reminds everyone on campus why they love PC and gives them the chance to share with those who will call PC home in the future.” Based on the overwhelmingly positive response of the accepted students, PC should be seeing a lot of familiar faces next semester!