The Ukraine vs. Russia: How Crimea Came to Be 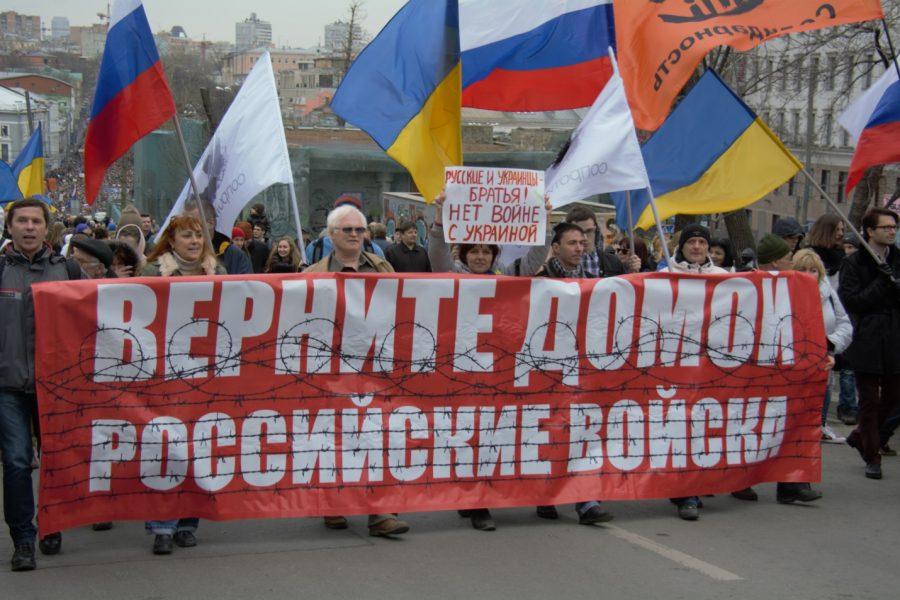 March 15 protests, named the March of Peace, took place in Moscow a day before the Crimean referendum.

In the fall of 2013, the Ukraine reached a pivotal moment in its history, one that would be a step towards a new and promising future but unfortunately turned to violence and continuous unrest. After years of struggling to overcome the post-Soviet chaos that was their country, the Ukrainian people wanted the prosperity and security that the European Union (EU) could provide. Namely, Ukrainians wanted the ability to travel freely throughout the continent, more job availability, a unified currency that would help alleviate their debt, and global recognition as a more sophisticated country unaffiliated with the toils of their Soviet past as a sort of puppet for Russia. All of these opportunities were enticing and achievable side-effects of the signing of an association agreement with the EU.

At the last minute, President Yanukovych decided not to sign the agreement and citizens arose in violent protest to their lack of control in their own future. The riots and protests escalated in violence which included bombings, fires, and attacks against official buildings. The Eastern part of Ukraine supported Yanukovych’s decision and, being a region of the country that culturally identified itself as Russian, pressed for closer ties to Russia. The support escalated further when a referendum was put to vote to allow Eastern Ukraine, also known as Crimea, to separate from the Ukraine and became a part of Russia. This loss was seen as Russia’s step toward regaining power over the region and made a lot of Western nations concerned for the future.

Since the separation of Crimea, the border regions have struggled with disjointed bouts of unrest and many foreign assessments have accused Russia of setting troops along its border and Crimea’s which only furthered the violence there. Russia’s president, Vladimir Putin, denies any such actions.

Some might look at the action of Crimea separating and joining Russia as okay. If the people wanted to be a part of Russia, voted on the issue, and the decision passed by an overwhelming majority, then they should be allowed to do so. What makes it so concerning for other nations observing these events is that it should not be the right or possibility of another nation to take part of another country. Putin has been accused of spurring on anti-European, anti-Ukraine sentiment within the region of Crimea and this may have eventually led to the referendum vote. Some speculate that this is Russia trying to relive its former days as a regional hegemon. Whatever the motivation of the people who voted for the referendum, or the motivation of Russian officials who have sent military support and protection, these motivations cannot trump another nation’s sovereign rights to its own territory – the very act which Russia facilitated when the Ukraine lost Crimea.

The unrest between the Ukraine and Russia is a concern for the US because of the long and tumultuous history between the two countries and their allies. With reports of Russian spies and intelligence agents being arrested on US soil the threat of Russia’s stretching arm of control is coming a little too close for comfort for the US. The US wants to avoid another Cold War as does the millennial generation who will have to face it. Ask Russia why they felt Crimea belonged with them and their answer is simple: the people voted to join Russia so Russia helped make it possible by providing military protection to facilitate the merger.

While turmoil in the area still remains, it is a far cry from where the country was just a few months ago. As to whether the Ukraine will ever get the chance to join the EU, it’s unlikely the opportunity will be offered again or anytime in the near future while discontent seethes along its borders.