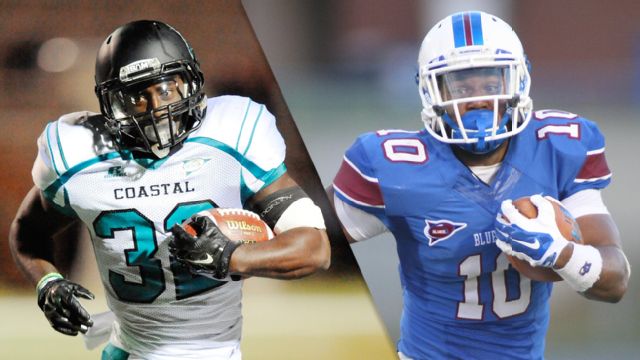 Last weekend, fall break began for Presbyterian College. While students were at home relaxing, the football team traveled to Myrtle Beach to take on Coastal Carolina in their first conference game of the year. The Blue Hose were underdogs in this game; Coastal was the top-ranked school in the division and were the defending Big South champions. Our Blue Hose nearly pulled off an upset as they lost 24-17.

The game was supposed to start at 2 p.m. but a thunderstorm delayed kickoff to around 3 p.m. Rain poured during the first quarter as we saw two defenses battle it out. Neither offense was able to gain any momentum because both were halted by great defensive plays and the weather. Late in the quarter the Blue Hose were able to take the lead off a Brett Norton field goal and the first quarter ended with Presbyterian College leading 3-0.

The second quarter was very similar to the first. It saw two defensives battle it out with a lot of rain. However the quarter was mainly dominated by Coastal Carolina. Early in the quarter Coastal was able to score a touchdown off a fake field goal and the kicker was actually able to score a touchdown run. The Blue Hose defense stood tall though and prevented Coastal from completing their two point conversation. Coastal’s kicker, Ryan Granger, would go on to kick two additional field goals that quarter. Our Blue Hose were shut out the second quarter as it ended with 12-3 lead for Coastal.

During the third quarter the rain began to taper off to a drizzle. Early in the quarter a botched snap led to a safety for Coastal and the Blue Hose stood tall, preventing Coastal from gaining any momentum. Darrell Bridges would later secure some momentum for the Hose as he scored their first touchdown off a 30-yard touchdown run. After the successful PAT by Brett Norton, the Blue Hose had narrowed the gap to 14-10, trailing by only four points The defensives battled it out for the rest of the quarter. Late in the quarter Coastal was able to secure another field goal, again by Ryan Granger, to end the third quarter 17-10.

Finally, in the fourth quarter, the rain stopped and people realized an upset could be very possible. Midway through the fourth, Coastal was able to extend their lead to 24-10 off a De’Angelo Henderson touchdown run and a successful PAT by Ryan Granger. The Blue Hose were able to regain some momentum off a Kaleb Griffin touchdown run, and after Brett Norton’s made PAT, the score was 24-17 in favor of Coastal. Presbyterian College now had some momentum and once again it seemed very possible they might be able to pull off of an upset. The Blue Hose were able to get within 10 yards of scoring a touchdown in the final minute of the game but came up short. The Hose ended up losing the game 24-17 but gave top ranked Coastal all they could handle.

Congrats to Ed Britt on recording his sixth career interception, one shy of the PC school record.