Shining a Spotlight on Scotty 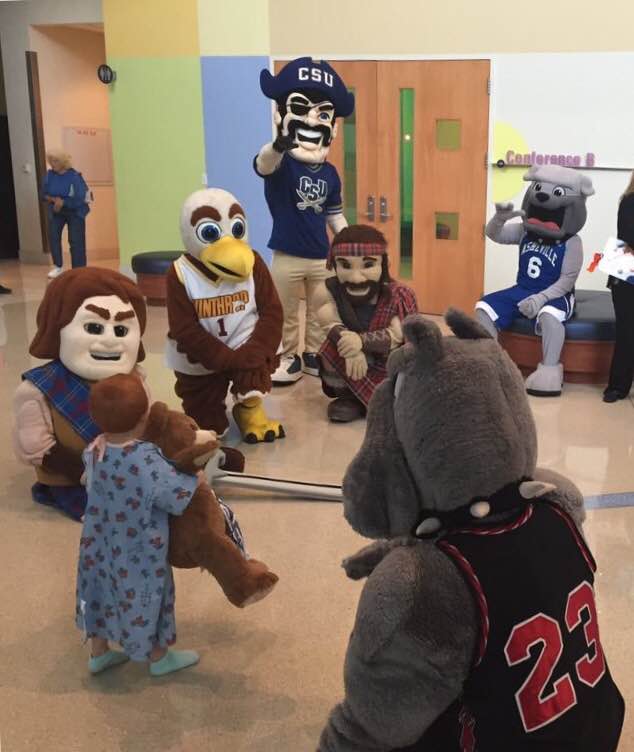 He’s a familiar foam face at football games and school functions. Scotty the Scotsman can often be seen taking pictures with young fans and rallying PC pride among the student body. But there’s more to Scotty than just the mascot suit.

Inside is junior Pete Peterson, who has always been a mainstay of PC pride on campus. During his freshman and sophomore years he was part of the cheer-leading team, and was the backup actor for Scotty.

This year, he’s Scotty full-time, something he’s always wanted do. “I wanted to be the mascot in high school but couldn’t because other commitments stopped me,” he said.

“It’s fun to go to sport events and be part of the culture of athletics,” Peterson added when asked why he wanted to be Scotty.

But he’s done more than just that. Recently, he traveled to the Levine Children’s Hospital in Charlotte as Scotty as part of the Big South Media Day for the upcoming basketball season. In addition to Scotty, mascots from Winthrop University, Coastal Carolina University, High Point University and others attended.

The mascots visited the children in their rooms, did a meet-and-greet, and had a dance off. “One child thought that Scotty’s sword was the coolest thing ever,” Peterson said. “It was special for me because I spent a week there when I was nine, so it was a cool opportunity for me to go back and visit and help out with making the kids feel at home.”

So the next time you’re at a sporting event, be on the look out for Scotty. He’ll probably be offering you a high-five.