Christmas at PC kicks off the holiday season 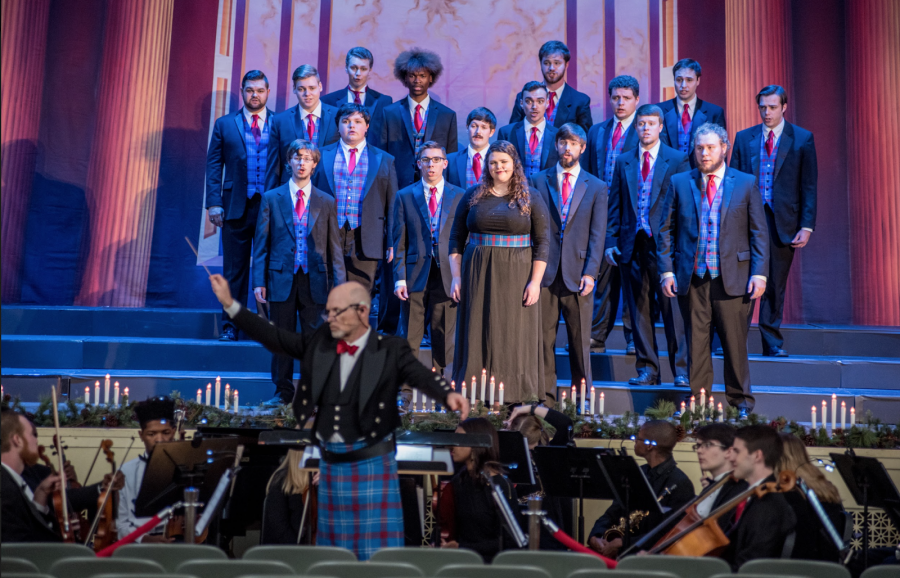 Dr. Porter Stokes has been teaching at PC since 1998.

As the holiday season approaches, so does one of Presbyterian College’s most beloved traditions: Christmas at PC. Over the years, the show has changed and grown, but its spirit has remained the same. Many students, choral and orchestral alike, sacrifice hours on end to prepare for what’s arguably one of the school’s most stunning events.

This year’s show will be slightly different, in that alumni PC Choir members will be returning to perform alongside current students. The returning alumni were overjoyed to have the opportunity to participate in this tradition. Chandler Salley, a 2017 graduate, is excited to be a part of another Christmas show. “I am thrilled to be able to sing at this year’s show because it allows me to make music with some of my favorite people,” Salley said.

2016 graduate Lindsey Gardner echoes this sentiment as she described what this event means to her. “There is something special about being able to back to a place you love and do one of your favorite things again. It’s like coming home again and it’s an excitement that cannot be matched,” she said.

Katie Anderson, a 2015 graduate, agrees entirely and remembers her own experience with Christmas show. “At its core, Christmas at PC is a work of heart. Beyond performing music that has been in rehearsal since August, Christmas at PC is a way to share the gift of music with the community and tell the greatest story of the season in a new way.”

Many of the returning alumni claim that some of their favorite and most moving moments at PC stem from their involvement in this holiday tradition. 2017 graduate Evan Haney recalls, “One year we began the Christmas show with the choir singing a cappella from the balcony. When we began to sing softly, chills shot through my spine and tears fell uncontrollably down my face. It wasn’t until we began singing that Friday night of the show that the music took hold of my heart and made me feel whole.”

These sentiments are not held by just the returning alumni; many current music students treasure the time they spend preparing for and performing Christmas show.

Senior Ashlee Anderson deems this event to be one of a kind. “This is hands down the best Christmas show I have ever been a part of. The theatrical atmosphere, the full orchestra, choir, and use of the stage and auditorium is impressive. Dr. Stokes’s vision expresses Christmas perfectly and always puts me in the Christmas spirit!”

Joel Tillirson, another PC senior, reiterates Anderson’s attitude and looks forward reuniting with alumni. “The opportunity to sing with past choir members is so special, and I think it is truly a testament to the PC community. Though these singers have been away from PC for years, we all cherish having performed in Christmas at PC.”

Molly Clukey, a senior, considers the show to be what truly gets her ready for the holidays. “It helps me officially get in the Christmas spirit by providing joy and happiness to my family, friends, and the people of Clinton!”

Although this performance is a celebration of the season, this year also marks the end of an era; it is the final show under the direction of Dr. Porter Stokes. For many members of PC’s Music Department, past and present, Stokes is one of the elements that made music special.

Doug Smith, a junior at PC, stated, “It makes me a little sad to know this is Stokes’s last show. I have been able to see how much effort and emotion he puts in each production and I know this one will hold a special place in his heart.”

Sophomore Meredith Foster, can’t imagine PC without Stokes. “He has played such a major role in all things music at PC, so it is almost weird to think of how things will run without it.”

Gardner also expresses a sense of mixed emotions. “I am a little sad that this is Dr. Stokes’s final show. He will leave a legacy at PC for a long time and I think it is fitting that his last big performance at PC be the Christmas show. It will be a bittersweet and special moment for everyone.”

Stokes’s farewell coupled with the devotion of all performers is sure to produce a dynamic Christmas show that PC has not seen for many years.