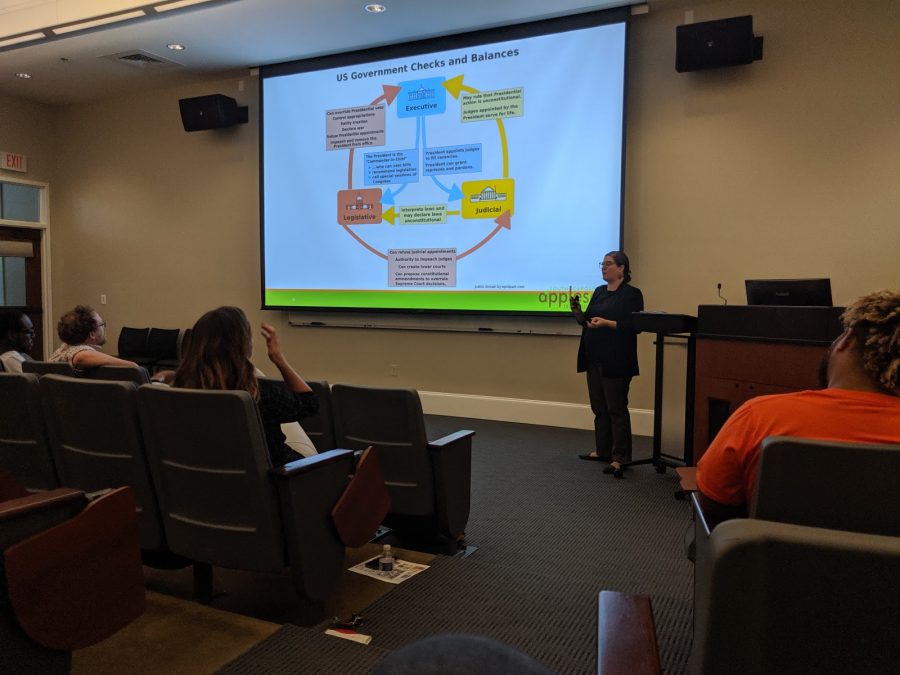 Pocock explained that no immigration policy has come from the legislative branch since the mid-1900s.

Students and community members joined in Kuhne auditorium to listen as Pocock explained how the United States arrived at its current state of immigration today. Pocock expressed the downward sloping trend in illegal immigration, along with the recent shift in the characteristics of immigrants from single men to families and unaccompanied minors, “If we had [an immigration] problem, it was ten years ago.”

Pocock then described a bipartisan bill that is currently sitting in committee that would offer state benefits to the more than 7,000 DACA recipients that currently live and work in South Carolina. This bill would allow for these young people to obtain in state-tuition at public universities, be eligible for state-sponsored scholarships and be able to apply for professional licensure in South Carolina.

Bautista then told her story about her life as an undocumented immigrant and then as a Dreamer. She explained how she walked to the border when she was eleven, walking for two nights and one day, only stopping to avoid being seen. Bautista explained that as a child, she didn’t understand why she was traveling to the United States, “We’re moving to the US, because that’s what we’ve been told.”

When she was a teenager, Bautista realized that her only option after high school was to join the undocumented workforce, making as low as four dollars an hour up to minimum wage. It wasn’t until the DACA legislation passed, that Bautista was able to move forward in life and do things such as receive her driver’s license or get a legal social security number for employment purposes, “I passed my parallel parking test on the first try.”

Bautista urged the audience to get in contact with their local legislatures and ask them to support SC House Bill 3404. In November, the Supreme Court will make their decision on whether to rescind any DACA legislation, effectively removing all dreamers of their legal status and making the South Carolina bill meaningless. As for now, Bautista explained that she will continue to be hopeful, “There’s no price on not being scared to drive down the road.”

Visit www.34for3404.com in order to learn more about this bill and read the stories of other dreamers.