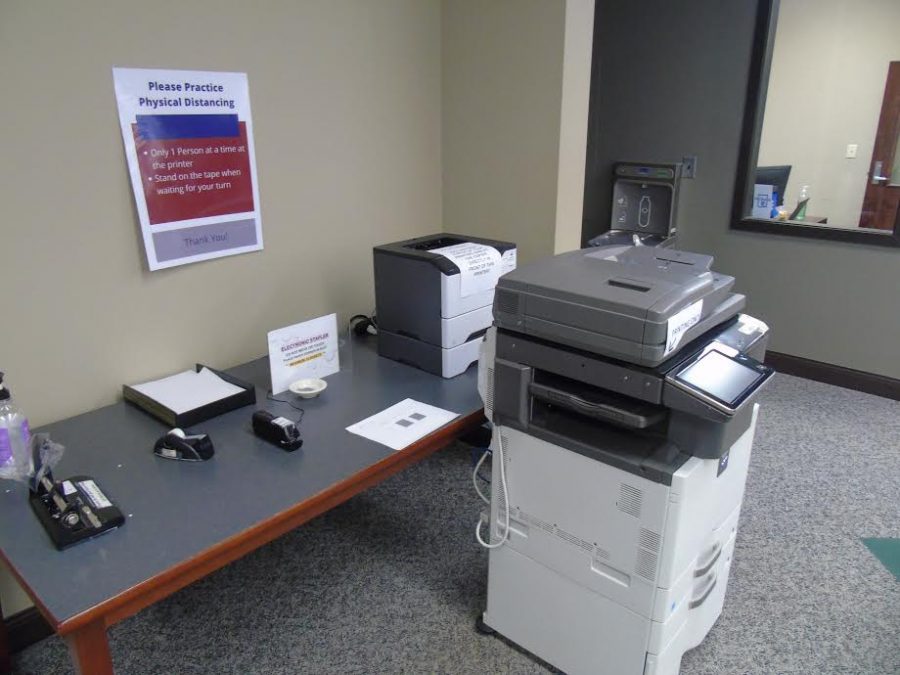 The current printing station at the Thomason Library.

Want to go print something at the Thomason Library? There’s one student printing off the first eighty pages of his Calculus eBook so he can study for his first test, but here’s another student who has a paper copy of his paper due in one hour and needs to print it off. What does he do?

Entering the Thomason Library, one will find a nice set of sixteen computers and chairs, with dividers between them to encourage quiet study time. Over near the left wall is a large printer.

One of the best services that Presbyterian College offers is free printing for all enrolled students. Students can print endless amounts of papers at no additional cost. However, problems arise when two or more students need to print something at the same time, especially during the coronavirus pandemic.

Due to the coronavirus pandemic, eight of the sixteen computers have been blocked off for social distancing. But this is not the only difference students noticed at the beginning of the fall semester.

Senior John Dover noticed that the library now had one printer instead of two. He first noticed that one of the printers was missing when he went to print off his history readings during the first week of class. Not only was one missing, but the remaining printer was also new, though it appeared inefficient.

He went on to say, “What I think happened with this one printer is that the old ones were—at least one of them was—shooting out very slight ink spatters, which makes sense because they’ve been there at least three years. I think that would be their reason at least for getting a new one. I’m not completely sure that it was just one printer doing that. I’m guessing—maybe it was both of them.”

If that is true, why did they purchase only one new printer instead of two?

“There’s a sign over the printer table now that says ‘only one person at the printer,’ and they have tape lines to keep people apart while they’re waiting. The coronavirus is probably why they went down to one printer,” said Dover. 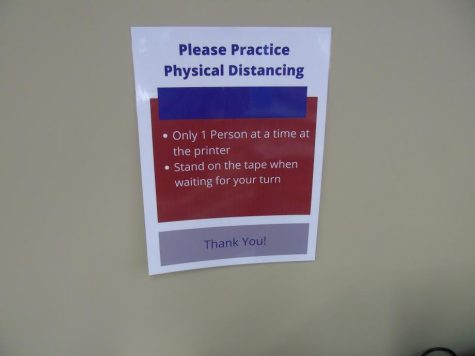 Indeed, the pandemic has sparked changes all over campus. Social distancing markers line the library floor, and the two staircases are marked “Up Only” and “Down Only.” These measures are necessary to keep students healthy and allow the school to function as close to normal as possible. Despite these necessary changes, students still need the library’s services.

“However, they still could have done two printers and have people line up. That would probably be better for social distancing because you wouldn’t have everybody lined up waiting for one printer. You would still have the speed of two printers even though only one person could be up there at a time,” said Dover.

The issue of only one printer is a problem for students like Dover.

“It’s happened to me before, as well as to other people, even when they had two printers, that someone was in there printing off 300 pages. I think the computers would alternate which one a print job would send to. If yours was sent to the one printing 300 pages, you were out of luck. Sometimes I had to leave something I printed and come back after my next class. The printers printed so fast it was never that big of a deal, but they definitely didn’t need to go down to one printer,” said Dover.

Even so, this is not the only problem.

“The computer situation is obviously because of coronavirus. There’s nobody directly sitting beside or in front of each other the way that it’s set up because of social distancing. The day I went in there to print all of my history readings, they had eight computers that you can use now, the way it’s spread out. Eight out of the sixteen. Four out of those eight had signs on them, ‘Usable, but not printing.’ And, of course, the students that are in there, which computers are they sitting at? The reason this is such a problem is that some students come in there to print something and get to class. If there are only four computers and one printer, how can a campus of a thousand students going to class get what they need to be printed? At least they have gotten all eight computers printing as of Wednesday, September 2,” said Dover.

A possible solution may be not to procrastinate and print one’s papers off early enough in advance that interference is not an issue, but this is not always possible. What if the library were to go back to providing two printers for student use?

This solution is not without its problem, either. The previous issue of having one’s paper sent to an occupied printer is still present. Yet, are these problems no larger than the ones students are currently facing? Dover presents his own solution:

“One solution I had thought of actually if the computers are printing these PDFs with a lot of black on them—that’s what is causing these ink spatters—or even just the fact that the printer is being used a lot, what I might pose is a new option for the screen where you can type in your password to print. There, it would ask if it’s for your own use or to turn in, that way you’d have a nice, new printer for something to turn in and the old one for PDF printing, and both would last longer. Then again, just getting back to two printers would be solution enough for what we’re dealing with right now,” said Dover.

Either way, Dover is still happy with the printing service the college offers.

“I’ve always loved going to the library and getting to print as much as I want without having to pay or have an account. I really do appreciate being able to go to the library to print, even if it is only one printer and four computers,” said Dover.

Reference librarian Betsy Byrd was able to shed some light on this dilemma. Thankfully, new printers are on the way.

“New printers have been ordered. So, at some point, we will have two printers again. I think there was a delay in the timing for getting the printers in. The new ones had not come in at the start of the semester. I haven’t heard that they’re in at this point, either,” said Byrd.

Byrd was able to elaborate on why the old printers were replaced.

“Over the summer, one of the printers stopped working, so that’s why we were down to one printer, and we were supposed to get two new ones in. However, normally when we order them, we get extra memory on them because we have so many students printing, and this one wasn’t ordered with extra memory, so it was working very slowly,” said Byrd.

Apparently, this is the printer Dover was struggling with in the first week of classes.

“That was our first issue, so to fix that, we pulled in this copier because we had that already in the library, and it has lots of memory, so that’s why we hooked the copier up, which is now where the printing comes out. We are supposed to have a new printer. I’m not clear on whether or not it’s here, but in order to put it over here, IT is going to have to put a new line in for us to plug it in, and that hasn’t happened yet,” said Byrd.

The coronavirus pandemic is a factor.

“We wanted to have them apart to allow for social distancing. We’re also hoping to get mobile printing; I know that’s part of the plan. We were hoping to have that at the beginning of the semester, and the way that will work, students will be able to print from their own devices. That would be really nice, particularly because of COVID. It would be great for students to be able to print from their own device,” said Byrd.

Either way, a second printer is coming soon. In the meantime, Byrd suggested some alternatives.

“So, we still do have the printer in the 24-hour study, and that works, and we have a printer downstairs in the lab, which we open the lab occasionally, but it’s not as convenient. We are hoping to have a second printer sometime soon,” said Byrd.

Thus, the issue of one printer and four computers in the Thomason Library will be completely resolved in the near future, allowing students to enjoy the ease of printing that they have for many semesters past.